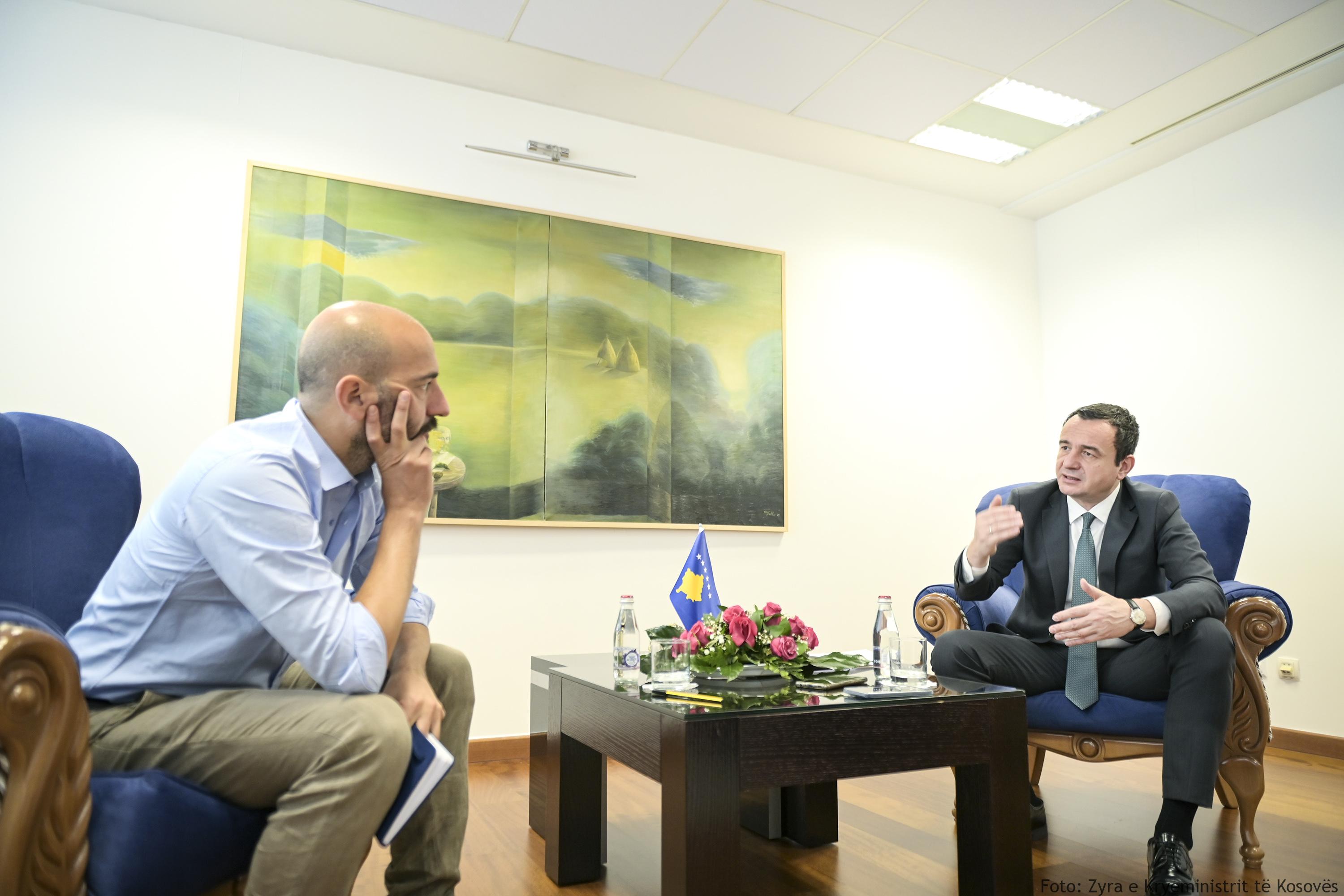 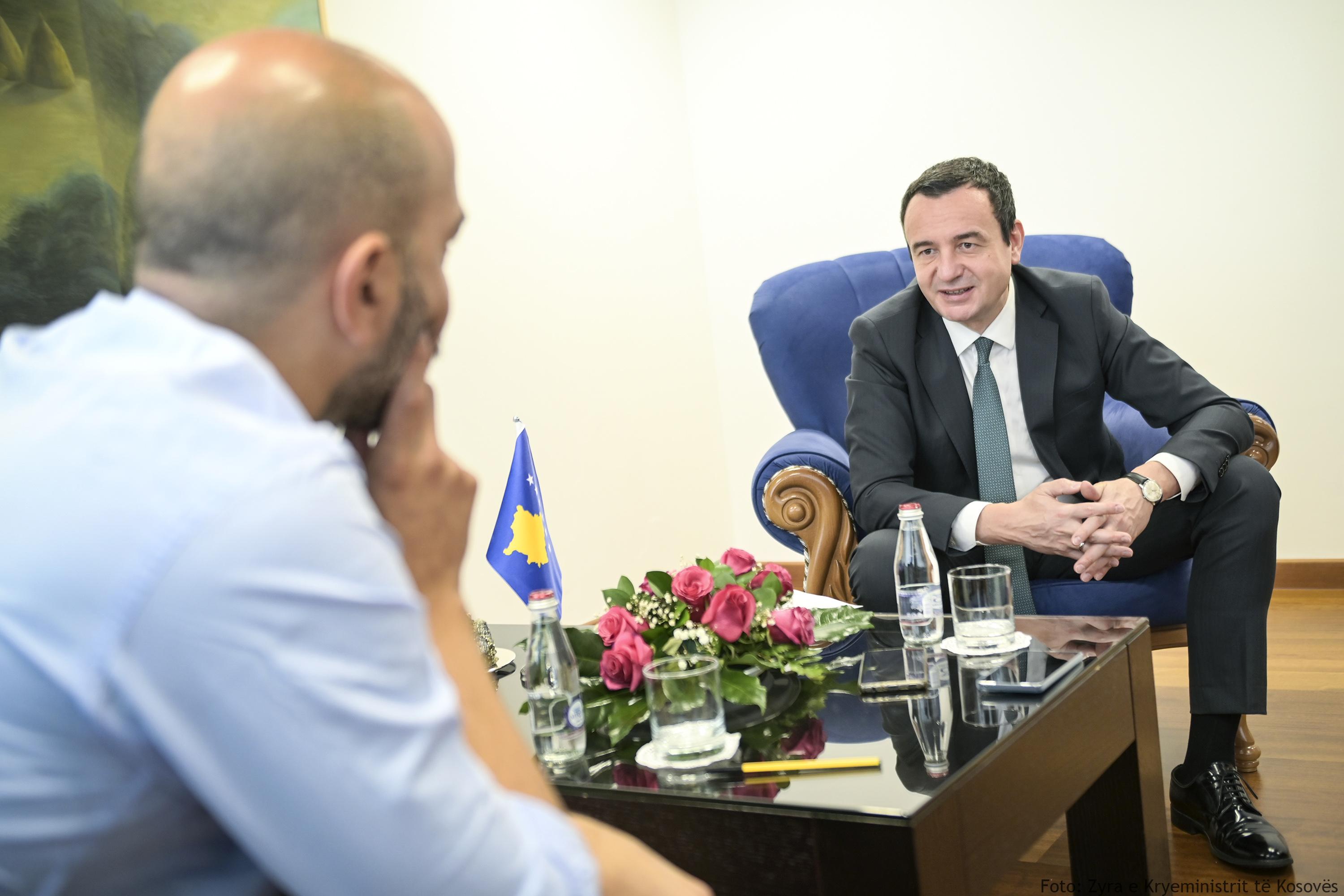 The interview of the Prime Minister of the Republic of Kosova, Albin Kurti, given to the Italian daily “La Repubblica”

Prime Minister of Kosovo
“We risk war, Putin is behind Serbia”

In the following you can find the full article published in “La Repubblica” from the interview of Prime Minister Kurti with journalist Fabio Tomacci.

The Serbs have 48 bases around our country. The protests were not spontaneous but organized by Belgrade with the support of Russia.

The two leaders meet twice a year, which is not normal. Last time, Vučić showed him the north of Kosovo on the map.

Prishtina – The risk of a new conflict between Kosova and Serbia breaking out is high. I would be irresponsible to say otherwise, especially after the world saw what Russia did to Ukraine. Kosovar Prime Minister, Albin Kurti, 47 years old, leader of the Social Democrats, has the merit of not hiding behind the style of discussion. On the desk of his studio, in the highest building in Prishtina, there is the file that documents Moscow’s influence in Belgrade, which means also in the Serbs living in the north of Kosova.

The line of establishing reciprocity of treatment between Albanians and Serbs, starting from the border crossing procedures between the two countries, is bringing consequences: in the February elections, VETËVENDOSJE! won 50.2% of the votes, becoming the most voted party in the history of independent Kosovo. The success was also justified by last year’s economic indicators: GDP + 10.53%, Exports + 83%, foreign investments + 22%.

How high is the risk of a new conflict?

I wouldn’t say very high, because we have the NATO contingent here, but it is certainly high. After all, we are a democracy bordering with an autocracy.
Before the invasion of Ukraine, the chances were few, now the situation has changed. The first episode, a consequence of the fascist idea of Pan-Slavism that the Kremlin has, was Ukraine. If there will be a second episode, for example in Transnistria, then the chances that a third war happens in the Western Balkans, and in Kosova in particular, are very high.

What elements do you have when you say that Moscow commands Belgrade in relation to Kosovo?

On the 25th of last November, President Vučić was in Sochi, it was the nineteenth meeting with Putin in ten years, on average they meet twice a year. This is not normal for leaders of states. In that case, Vučić said: we talked about double standards and hypocrisies in international relations. Putin is aware. I showed him the north of Kosova on the map.

That Serbia is in the Russian orbit is not something new. What has changed?

In September 2021, under the lens of reciprocity, I decided that temporary license plates be placed for Serbs who would enter Kosovo, they responded by flying MIG29 to our border, where the Russian ambassador and the Minister of Defence of Serbia went. I remind you that the Serbo-Russian humanitarian centre built in 2012 is located 160 km from the office where you and I are talking. And 151 out of 250 MPs of the Serbian Assembly are members of the Serbia-Russia alliance group.

From a military point of view, have you noticed any movements that concern you?

Last year, they planned 91 joint military exercises, and carried out 104 of them. The two most important are called “Slavic Shield” and “Slavic Brotherhood”. Since August 2001, Serbia has placed around the border with Kosovo 48 advanced operational bases, 28 of the army and 20 of the gendarmerie. Serbian veterans have all become pro-Russian. So to speak, the danger is there and we are warning it.

You postponed the implementation of the measure for Kosovo license plates and documents to September 1, measures that provoked protests in the north of Kosova with a majority of the Serbian population. Will you change these measures or keep them the same?

In the third week of August, there will be a meeting between us and the Serbs in Brussels on Kosovo-Serbia relations. I hope it contributes to reducing tensions.

Judging by the declarations of the exponents of the Serbian List, they will remain against it. But, will the reform still enter into force?

Changing the license plates placed by Milošević is a decision of my government. They have two months. The same applies to documents, on Sunday for the few hours that it was in force, at the border points where they circulate freely, 2679 permits were issued without any incident. That’s why they had to call someone for the barricades. The protest was not spontaneous from the bottom (people), but was organized by Belgrade and supported by Russia.

On Sunday, there were masked people on the streets. Do you have a more accurate idea now?

The Prosecutor’s Office is currently reviewing the footage published on social networks. They were people on the payroll of Belgrade, who work in illegal structures in the north of Kosovo. Some of them are criminals, placed last year on the black list of the Treasury Department of the United States of America. I am referring to Radojčić and Veselinović. It was a déjà vu, a method used by the Serbs in the early 90s during the breakup of Yugoslavia.
But Kosovo today is a democratic country and they can do very little. They are frustrated because even though they don’t recognize us as a country, our economy is booming.

Don’t you think that your stated objective of joining NATO will cause further tensions with Serbia?

The opposite is true. Our partnership with the Peace Program and joining NATO will contribute to maintaining long-term peace. And it is based on Euro-Atlantic values.